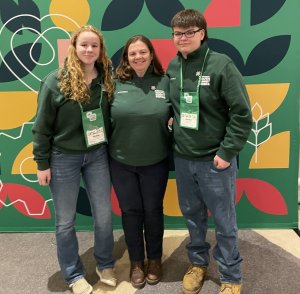 Do you really know where your food comes from?

You may know something about the subject, but most likely not nearly as much as Hope Healy and Owen Weigel, 4-Hers who initiated the Lots to Plots project. Because of their efforts, the teens were recognized by the National 4-H Council earlier this year and awarded a $2,000 grant to combat food deserts in Massachusetts and provide an “on-ramp to agriculture” for teens.

“Their hard work paid off,” said Meghan Riley, a 4-H Educator in Plymouth County who has mentored the teens. “As far as keeping teens as active and engaged as possible, this project hit the nail on the head.”

During the pandemic and the 2020-21 school year, Hope and Owen, along with Sofia Black, Faith Motta, and Hope Motta, decided to address Massachusetts’ growing problem of food insecurity, which impacts 40% of the state’s population. They believed that gardening could not only be a valuable way to address this issue but also become a “bridge” between urban and rural settings. In other words, they could engage teens in agriculture — even those in urban settings —through their project, Lots to Plots.

The teens started brainstorming project ideas while meeting virtually. They noted that lower-income households have less access to healthy food than affluent families, and that they could adapt agricultural practices on a small scale for teens. Lots to Plots was born. “We’re going to put plants in their hands… You live in New York City? You can still have plants,” explained Hope.

An important step along the way: Hope and Owen attended the National 4-H Youth Summit for Agriscience (or “Ag Summit”) in Bethesda, Maryland in March 2022, assisted with support from the Massachusetts 4-H Foundation. Owen, from Rochester, and Hope, from Plymouth, both now juniors in high school, met youth and experts from all over the country at the conference. They took workshops led by industry leaders and managed to squeeze in a bit of sightseeing, touring Washington D.C. monuments at night.

Owen, who lives on a farm where his family raises beef and poultry, had never visited an urban area before. He met teens from New Jersey who wanted to garden but didn’t have enough land or money, reinforcing the importance of Lots to Plots. Owen found learning about other teens’ experiences and building a network to be the most valuable parts of the Summit.

Hope shared Owen’s enthusiasm. “The Ag Summit was incredible… Learning about the ag career exploration was most valuable to me. Hearing from experts, especially the female speakers, and where they’ve gone in their ag careers was really cool to me.”

The teens then submitted a two-page project proposal to the National 4-H Council for a solution to an agricultural issue, and following its approval delivered a presentation via Zoom to industry leaders in late April. Their efforts resulted in a $2,000 grant, one of 12 grants awarded by the National 4-H Council for projects from across the country. 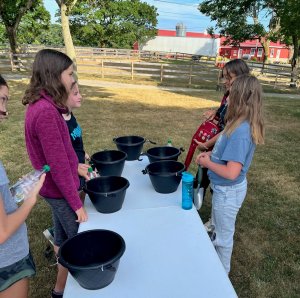 Teens plant sugar snap peas in hanging baskets during the first workshop of Lots to Plots.

To kickoff Lots to Plots, the 4-Hers held a series of three workshops this past summer for teens at the Plymouth County Center for Agriculture. They focused on youth from urban areas. The 4-Hers guided the teens in planting, harvesting, and achieving soil health, and used window boxes and other techniques so the attendees encountered few barriers to entry in exploring agriculture. “I think it’s great for people in urban areas, because they don’t get as much exposure to agriculture,” said Owen. “It’s so important for society and our planet.”

It also put the 4-Hers firmly in the role of educators; they shared the knowledge they have gained through their years in 4-H. “The biggest value of this project is the teens’ confidence and understanding that they know so much about this subject… They are already leaders in this field. They are at the point where they can share this knowledge with kids who haven’t had their experiences,” explained Meghan.

Most of the funds from the grant were put toward consumables such as seeds, soil, and compost, and the participants kept seedlings to take home, explained Meghan. The 4-Hers will survey the attendees for feedback following the three workshops. They hope that Lots to Plots continues beyond the summer and that its attendees eventually join 4-H.

Hope, Owen, and the other teens are still astounded at how far their idea has gone. “If you could get involved in something, do it,” advised Hope. “You don’t know how big it will get.”